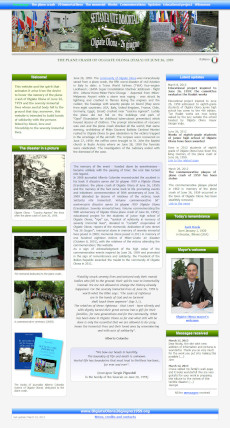 Historical notes relating to the plane crash of Olgiate Olona of June 26, 1959, biographies of the seventy immortal lives and some images contained in this site are taken from Alberto Colombo’s books (Il disastro aereo del 26 Giugno 1959 a Olgiate Olona and Settanta vite immortali, whose rights are owned by the author) - completed and updated -, from mass media, or kindly provided by the relatives of the seventy immortal lives who authorized the publication.
As for the photographs contained in this site, their authorship, ownership and origin are shown by overlaying the mouse on the pictures.
If required, we are available to correct any mistake or inaccuracy contained in this site and to include the credits relating to those pictures whose origin has not been found. 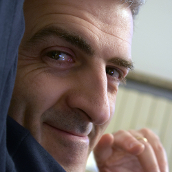 Nicola Puddu, webmaster of this site, is the author of the song and video Olgiate Olona, 26 giugno 1959 dedicated to the plane crash, performed by Panama Bus band and presented for the first time at the Evening of memory (June 26, 2009) in Prepositural church of Olgiate Olona.
Born 1968 in Busto Arsizio (Italy) he has always been living with his family in Olgiate Olona. Great lover of computers, videomaking and especially music and guitars: in 1993 he was among the founders of rock band Panama Bus of which he is still member as guitarist and composer. He was inspired and passionate by the reading of books Il disastro aereo del 26 giugno 1959 a Olgiate Olona and Settanta vite immortali written by Alberto Colombo to the point of committing himself in the creation of this website, in collaboration with the mentioned author and friend: this website being intended as the point of no return to build and maintain bonds with people who were indelibly touched by this tragedy and to continue the “journey of memory and solidarity” taking advantage of the enormous potentialities offered by Internet network.

The logo of the commemorative events of the plane crash of June 26, 1959

Conceived by Alberto Colombo and perfected by Nicola Puddu in 2011, the logo of the commemorative events of the plane crash of Olgiate Olona of June 26, 1959, is synthesis that - with an icon and a few words - evokes the historical fact and the events in remembrance.

Settanta vite immortali (trans. seventy immortal lives) are the unfortunate protagonists of the historical fact: their mortal bodies fell to the ground, their spirits soared to immortality, and just as immortal lives their memory survives and is perpetuated by the commemorative events.

Olgiate Olona – 26 giugno (trans. Olgiate Olona - June 26) are the place and the day of both the historical fact and its memory: June 26, 1959, when the town Olgiate Olona was miraculously saved by the plane crash, and June 26 of every year, when the community of Olgiate Olona commemorizes with a solemn and sober ceremony animated by those who care about the seventy immortal lives and by the new generations.

The graphic composition of the logo reminds a moving flag: the spirit of the seventy immortal lives soars in the immortal peace of clouds in the sky, as their memory soars in the hearts of their beloved ones in Olgiate Olona and worldwide.